Cannabis has been used for medicinal and recreational purposes for centuries, and its effects are sometimes be more varied and complex than many people realize.

On top of this, many of these effects are dead giveaways that someone's stoned. These can include dry mouth, increased appetite, and slower reaction time. We've all seen it before!

However, one of the most dead giveaway signs of marijuana use is red, bloodshot eyes and heavy eyelids, colloquially known as "high eyes".

What actually causes high eyes though? And is there a way to not be so obviously stoned?

In this blog post, we'll discuss what causes it, as well as some tips for managing it.

The Classic Trope of "High Eyes"

“High eyes” is something that is often associated with people who have smoked some cannabis or even some of the newer alt cannabinoids. In fact, it's so notorious that it's commonly used as a key character trait in stoner culture and media.

You know what I'm talking about; the little squinty red eyes - here I'll help you out a bit. Here's a screen shot from a classic stoner movie - Dazed and Confused 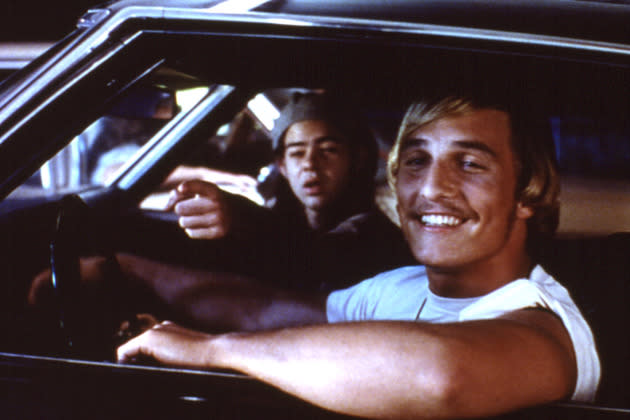 Red eyes and heavy eyelids are often the most noticeable sign that someone has used marijuana. I mean, look at those guys - it's pretty clear they're stoners, even if you haven't seen the movie.

This is largely due to the effects that come from smoking cannabis.

When THC, the primary psychoactive compound in cannabis, is processed by your body, your eyes tend to become more red, relaxed, and somewhat more sensitive to light. These factors combined are the ultimate recipe for stoner eyes. But, what actually causes "high eyes"?

As mentioned previously, Tetrahydrocannabinol, commonly known as THC, is one of the primary active ingredients in marijuana. Known for its psychoactive effects, it is a major culprit to the "high eyes" effect.

The way THC works is by binding to specific receptors in the brain, triggering a cascade of changes in the body's endocannabinoid system. This affects the body's response to pain, appetite, mood, and sleep. In addition to its effects on the central nervous system, THC can also increase blood pressure, heart rate, and appetite.

Additionally, the binding of THC to cannabinoid receptors can lead to the dilation of blood vessels in the eyes, which is the cause of red eyes and heavy eyelids.

The Role of Vasodilation

One of the primary reasons weed causes red eyes is because of vasodilation. This is a process where the small blood vessels in the eyes expand, allowing more blood to pass through them. This increased blood flow can cause the whites of the eyes to appear red or bloodshot.

The Connection to Heavy Eyelids

Additionally, the increased blood flow that comes from vasodilation to the eyes can cause the eyelids to become a tad bit heavier. Combined with the sleep inducing and muscle-relaxing properties of a strong indica, this can make it difficult to keep them open and results in the heavy eyelid stoner eyes.

How to Get Rid Of High Eyes

Got a bad case of the stoner eyes?

Fear not - we've got a couple quick trips up our sleeves we're willing to pass down to you.

Okay, these aren't really secret tricks. In fact, getting rid of high eyes is pretty simple for the most part. The first one is to use standard eye drops.

Seriously! If you don't have any, just head down to the closest store near you and pick up some eyedrops, and use as directed. Eyedrops are great for alleviating high eyes since they help reduce some of the irritation and redness that comes from having high eyes.

Another trick that's useful, is some people have even found that using a cold or hot compress on their eyes can also help to reduce the redness. Just wet a clean washcloth to the desired temperature and hold it onto your upper facial area and eyes for a few seconds. Repeat, if necessary.

If you've been called out at the family cook out for being a little stoney, it's probably due to the high eyes.

While many view high eyes as a nuisance, we think it's fair to appreciate this unique side effect of cannabis. It's not only interesting and a great peer into the way our body processes THC, but it's also become synonymous with stoner culture - which we can always appreciate.

However, if you're still not one that's keen on this effect, at least you should have a couple methods to mitigate high-eyes next time you experience them and need a quick way to fix it.

Here's to the next family cook out, where hopefully someone else is asking you for eyedrops because they got called out, not you!