In today's fast paced society, important news sometimes flies under our radar. Although much of the headlines that make their rounds tend to be easily dismissed, there was one headline that made our team jump out of their seats.

For those who may have missed it, Thailand officially delisted marijuana from their list of illegal narcotics on June 9 of 2022. Officials have encouraged the use and growth of cannabis, given that it's not smoked in public if it's over 0.2% THC.

Although there's some red tape to dance around, this is a major win when it comes to the future of Marijuana around the globe, and especially in South East Asia.

So, what's the big deal? Medical marijuana has been a thing in Thailand since 2018, and if it's anything like how we rolled that out here, practically everyone has been smoking in Thailand for a while... right?

Thailand has deep roots in the history of Marijuana, especially the popularization of it in the in the United States during the Vietnam War. Although an integral piece to the culture we see today, the history behind Thai weed, and the relationship between Thailand and Marijuana is a bit more complex than you would imagine.

Thailand is one of the original locations across the globe to become known for their landrace strains. As a result, a large portion of the strains we see have Thai strain genetics deep rooted in them.

What is a Landrace Strain?

For a quick refresher, a landrace strain is simply a cannabis strain that grows naturally in the wild.

A key thing to note is that different areas across the globe have different environments. This resulted in different strains of cannabis that would differ due to the conditions they evolved to grow naturally in.

Although, naturally, it's likely there was some variety in genetics in each location. However, for the most part, there was a consistency and distinguishable difference you could expect based on the location your bud came from - Hence the names and popularization of their use in the early popularization of marijuana.

These are genetics that have laid the foundation for the aggressively potent marijuana we see today.

Below is a list of the many well known landrace strains - We'll be breaking down the Thai strain.

The Thai (also known as Thai Orange or Thai Stick) strain is one of the most popular landrace strains. Thai Weed gained popularity in the late 60's/early 70's during the Vietnam war, which was pivotal in shaping the culture of Marijuana today.

In addition, the literal characteristics of Thai Weed have heavily contributed to some of the strains of today.

Thai Weed is known for it's tall, yet dense structure. This structure was a driving factor in a common nickname given to the strain; Thai Stick. This was due to the fact that it wasn't uncommon for the entire stalk of a plant to be dried and cured in one piece, then skewered on a stick and wrapped with string.

As a result, the buds would gravitate inwards towards the stem and you would be left with one long stick of buds, similar to how some of the more impressive colas harvested from today's cannabis strains look. 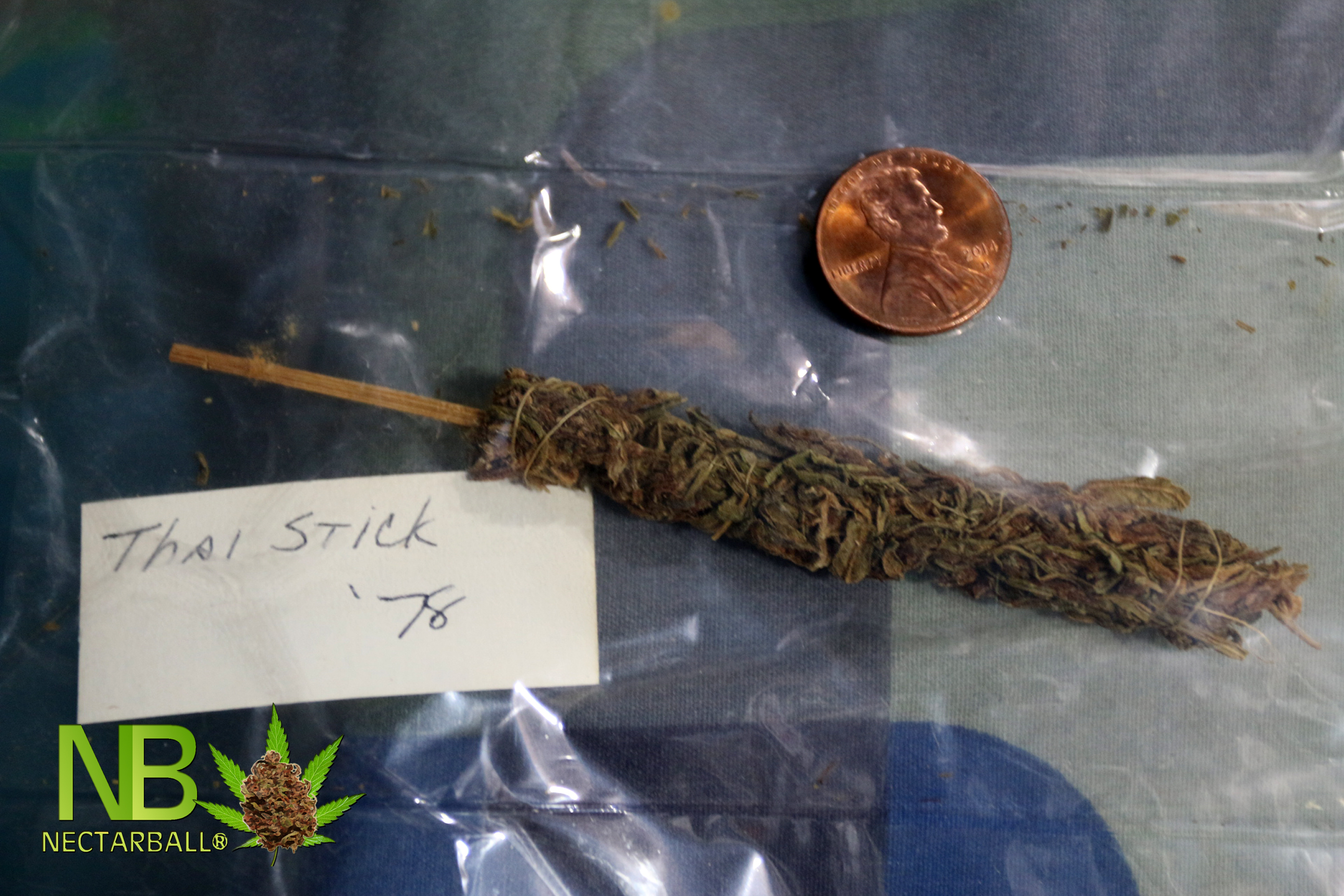 A Preserved Thai Stick from the 70's (Source: Nectarball; Classic Cultivars of the 1970’s)

In terms of effects and potency, the original Thai sticks were strong in relation to the average potency you could expect when scoring grass back then. On average, it's said they had a ~15% THC percentage. With rumors of strains being in the 20 percentile range, they definitely were among the more effective buds you could get, considering the average bud you could buy on the streets in the US would have a ~5% THC level on a good day.

Of course testing wasn't as advanced as it is now, so we imagine these are likely tall tales. Can you imagine smoking some 20% flower back in the 70's?

The Thai strain was known not only for it's unique medium it was sold as (thai sticks), but also for it's effects.

Thai Stick(s) were known in large part also for their strong sativa effects. Said to be pure 100% sativa, they were said to be extremely energizing, yet calming; similar to the haze strains of today.

What is a Thai Stick?

The term "Thai Stick" is commonly thrown around when referring to a few different things.

The first, and original usage of Thai stick, was given when referencing Thai weed in general, as it would frequently be sold in the form of buds wrapped around a stick.

However, when being brought back to the US, growers had begun to breed Thai weed on their own, without the added presentation of twine and sticks.

The original term had stuck around, and became a common term for the strain on the streets.

However, in the recent years of marijuana industry growth, thai sticks have come back under their original form. A quick search of a thai stick will bring complex creations reminiscent of the original thai stick.

On top of being herbs on a stick, enthusiasts have also begun adding concentrates and hemp leaves for added smoking experience.

The Impact of Thai Weed

Did you know that "Shotgunning" is a term that originated from the era of Thai Weed?

The term, known for blowing the fresh smoke inversely through a pipe or joint into another persons mouth, is derived from soldiers stationed in Vietnam utilizing the barrel of their shotgun as an impromptu pipe for smoking their bud, as seen here:

However, that's not the only mark that Thai weed has left.

Thai weed was highly saught after during it's debut in the US. This is driven by some of the factors above, but mostly for the fact that while encompassing said factors, was unique in being one of the only strains in that time to consistently do so.

Unlike some of the readily available cannabis strains of the time, Thai Weed was also known for being seedless. While most of the herbs you would score in the 60's and 70's was mostly seeds and stems, a bag of Thai was desirable for it's seedless and sticky bud structure.

Thai weed had set a new standard that US growers and black market dealers had to meet. Partially to compete, but also due to the fact that it was now known to be possible to grow seedless cannabis; also known as sensimilla.

In short, the landing of Thai weed in the US can be seen as the catalyst to some of the early advancements in marijuana breeding, and even culture. The quality was never before seen and motivated growers to dedicate a whole new level of care to their cannabis crops.

The Legal Status of Cannabis in Thailand

Throughout it's history, Thailand has had a deep relation with Cannabis. However, only recently have citizens of Thailand have been able to freely appreciate cannabis. This is not only due to the laws in Thailand itself, but also due to the stigma that surrounds the plant in countries nearby.

Although prominent, cannabis has been illegal in Thailand for a large part of the recent century. Much like we've seen here across the pond, however, the use of cannabis was extremely prominent regardless of the law.

The large majority of Southeast Asia has some of the strictest laws related to Cannabis. This makes the dynamic of Thailand and it's behind-the-curtain embrace of cannabis (until now) a unique one.

A good way to paint this dynamic is like this:

Thailand has utilized cannabis for centuries and incorporated it into a wide variety of every day scenario. This ranged from medicinal uses, to even as a spice in some common meals. Although illegal until now, the plant has been an integral piece of Thai culture.

Cannabis visual trait on the wall of Thai ancient temple in Bangkok. Showing the use of Cannabis in local home hundred years ago (Source: Sawasdee Clinic: Medical Cannabis In Thai History)

On the other hand, though, countries like Malaysia or Singapore are known to hand out life sentences and even death penalties for drug related offenses, with cannabis included. Although small movements are also happening in these countries, it's unlikely cannabis legalization in these locations will have anywhere near as much traction as Thailand anytime soon.

To the surprise of those unfamiliar with Thailand's history with Cannabis, the legalization of Marijuana in Thailand was embraced. Considering that smoking a joint in most neighboring countries will result in severe penalties, it's understandably tough to wrap your head around.

However, as we discussed, marijuana has been engrained in Thai culture for quite some time. With the recent legalization, many perceive this newly found freedom to enjoy Cannabis as a breath of fresh air.

Not only is it embraced, but the amount of people eager to participate in the government program that allows cultivation is astronomical.

For context, citizens who are looking to grow their own cannabis must be enrolled in a program that is overseen by the government. In short, if you wanna grow, you have to register your plant!

The way this is done is via an app, called PlookGanja, which allows for easy plant registration and quick access to news related to cannabis in Thailand.

At launch, the app had logged more than 35 million logins and had temporarily been taken down due to server load.

If you can take anything from that; the people of Thailand have been waiting for this moment for a long time. 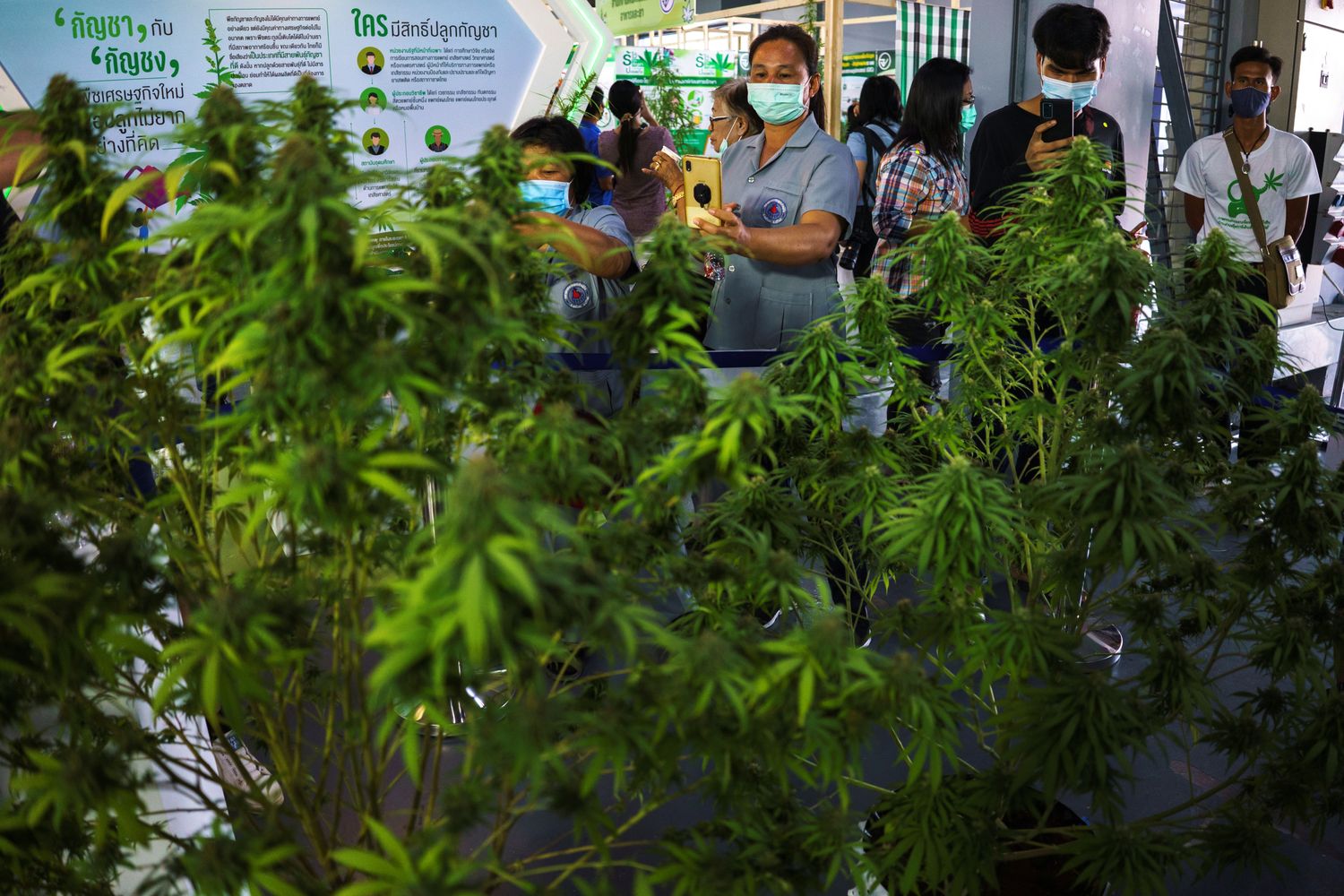 Is Thailand the Next Cannabis Tourist Destination?

As the first country in Asia to legalize cannabis, many are looking at Thailand as a major cannabis tourism destination due to the lack of availability in the rest of the continent. Even the country's government is anticipating a massive economic boost:

The combined market for medical cannabis and hemp in Thailand will expand by about 15% annually through 2025, when it’s likely to reach 43 billion baht ($1.2 billion), creating opportunities for growers and small businesses, according to the University of Thai Chamber of Commerce.

However, if you're thinking about packing your bags and heading down to Bangkok to try your own Thai stick, you might want to wait before buying your tickets.

As of now, one thing is certain - these are all okay for now, you just can't publicly consume cannabis products with more than a 0.2% THC level.

This is reasonable of course, however there's a lingering concern that legislation will change over time. Many have also voiced out their concerns about liability when it comes to growing and safety regulations. As right now, there's no way to monitor the condition a plant is grown in, or testing standards that ensure cannabis that is sold can be safely consumed.

Paving the Way for The Future of Cannabis

With their long history with Cannabis, Thailand has earned their spot at the legal cannabis round table. The government is hesitant on encouraging tourism, but has openly invited those looking to establish business relations in anticipation of their future growth.

With such great momentum early on, it's exciting to ponder what the cannabis industry will become in the coming years.

Many have speculated that the nation may be a key location for medical research into cannabis. As the world continues to embrace legalized cannabis, it's very likely that countries like Thailand will continue to play a major role in the research that goes into developing a better understanding of the substance.

Considering the climate and impact that Thailand had on cannabis early on, we may see them become a key part of cannabis in the future, and revolutionize it a second time.