What is CBDv? - The Origin, Effects, & Comparison to CBD

The endocannabinoid system truly is mysterious. It's is a biological system that is present in all mammals, made up of many different receptors and neurotransmitters, and is responsible for regulating a number of functions in the body including mood, memory, appetite, pain, and sleep.

The two most well-known cannabinoids that affect the ECS are tetrahydrocannabinol (THC), and cannabidiol (CBD). These two cannabinoids are the most researched in the medical world, but what you may not know, is that there are many other cannabinoids that have been discovered in recent years.

One of these less-known cannabinoids that has gotten an influx of attention recently is CBDv.

As CBDv begins to gather more eyes on it, more people are curious about what makes it unique or different from the 100s of other cannabinoids there are. While some swear by it, others aren't impressed.

So, what gives? Does CBDv even have a place at the cannabinoid round table? Let's break it down.

As you may know, cannabis (along with variations of cannabis like hemp and marijuana) contains a plethora of compounds called cannabinoids, some of which have become known for their pharmacological properties associated with them. Although there are hundreds of cannabinoids, two of the most commonly known ones are CBD and THC.

To give some context to some of those who may be more green to the terms, here's a quick breakdown:

THC, also known as Delta-9-tetrahydrocannabinol, is the psychoactive component in cannabis that causes the “high” associated with recreational and even medicinal use.

However, CBD, or cannabidiol, on the other hand, does not have these intoxicating properties. While CBD is non-intoxicating or psychoactive, it has become widely known as a potential source of relief for those with conditions such as chronic pain and/or anxiety, studies have shown.

So, what is CBDv?

CBDV, also known as cannabidivarin, is structurally similar to CBD (cannabidiol). Similar to THC, CBD, and a long list of others, CBDv is a cannabinoid that interacts with your ECS (Endocannabinoid System). As a result of this interaction, the ingestion of these cannabinoids results in a variety of effects. However, when it comes to CBDv specifically, the effects of this lesser known cannabinoid are more inline to CBD, mainly due to the fact that they aren't psychoactive.

Before we discuss some of CBDv's unique properties, let's take a close look at the molecular structure of these two compounds, as although they are similar, they have a few stark differences structurally speaking. 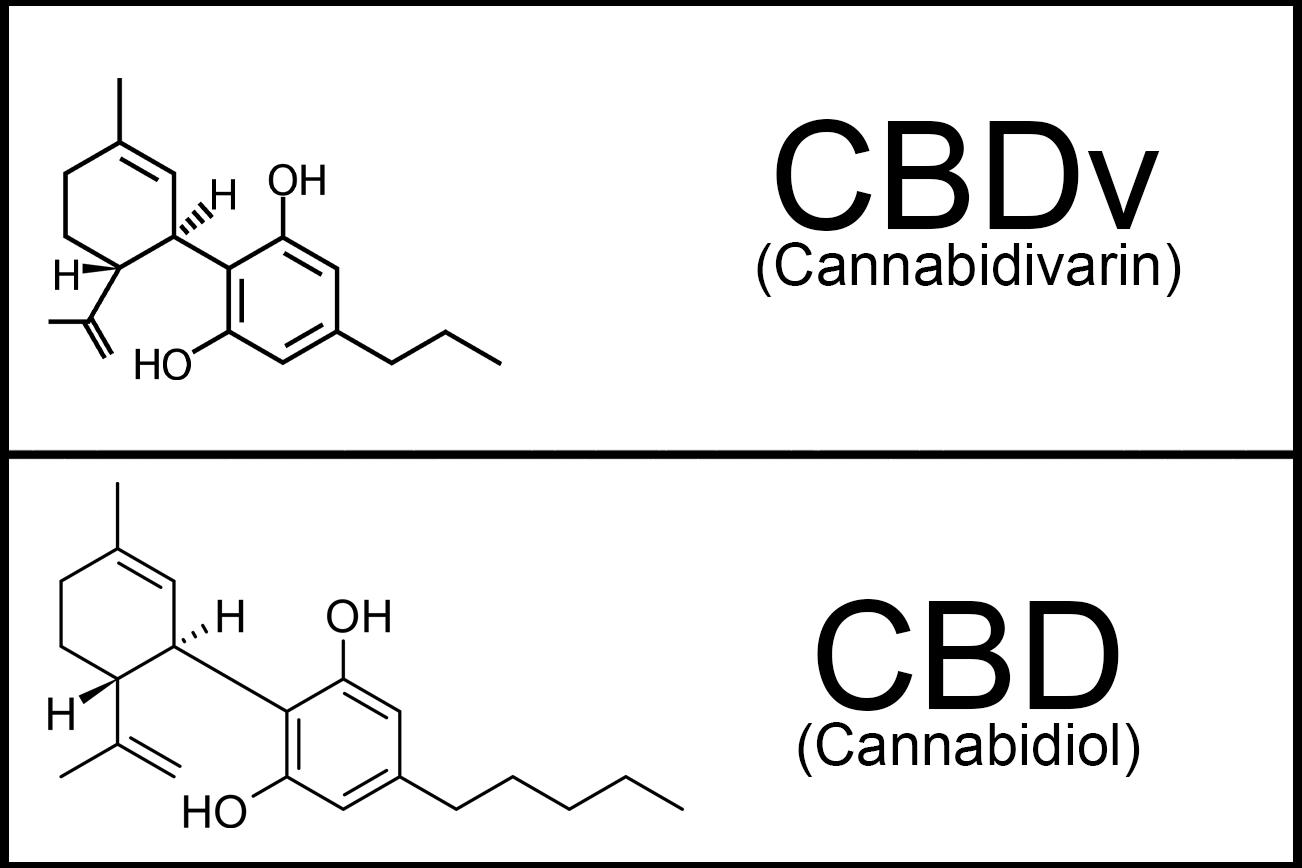 As you can see above, there's a few key differences in the molecular structure between these two cannabinoids. For instance, you'll notice that CBDv has a shorter sidechain than it's common counterpart. Much like other cannabinoids, such as recently popularized THC-P, some have associated differences in sidechain lengths to a large portion of the differing effects that are felt when the compounds are consumed.

Where did CBDv come from?

What is a Landrace Strain?

A landrace strain is a term used to differentiate "original" cannabis strains from the more diverse strains that we see popularized today. These are strains that have been cultivated in their natural habitats for thousands of years.

Landraces have evolved over time due to their respective climates, and as a result, they are slightly different from each other. For instance, in the early days of recreational popularity, you'd hear about the preferences that people would have towards the "Thai" strain, which was sativa leaning, over the Hindu "Kush" indica leaning strain. These stark differences between natural cannabis are what led to the indica and sativa categorization, mainly due to the characteristics that some would share, and vice versa.

Thousands of years ago, originally grown naturally without human intervention, landrace strains were quickly realized by local people in their respective locations for their potential benefits. As a result, farmers had begun to cultivate them. The Link Between Landrace Strains & CBDv

Over time, they were popularized and began to be cultivated around the world in other countries such as the Netherlands, Germany, and Canada. With some of these strains being high in CBDv naturally, we've slowly seen more of an interest in CBDv high landrace strains that are cultivated specifically and bred for CBDv.

Thanks to some of the advanced growing techniques we see being used by breeders today, these landrace CBDv heavy phenotypes have laid the foundation for some of the high CBDv hemp strains like Forbidden V, which is used for our THC-P flower, to be grown.

CBDv vs CBD: What’s the difference?

When it comes to a comparison between the two cannabinoids, they share a fair amount of similarities. To be frank, although CBDv has been around for a long time, there's been very little research that has been done on it. Some can attribute this due to the fact that it's one of the rarer cannabinoids.

So, what kind of things are notable when it comes to comparing the two?

Much like CBD and CBG, CBDv is known for its potentially therapeutic effects. Some have said it's fairly similar to CBD, but can be used as a more potent option when addressing more severe conditions. However, due to the limited research, much remains unknown when it comes to the impact CBDv can have both short-term and long-term when it comes to medicinal use-cases.

In a time where you can find a wide selection of cannabinoids available to purchase online, you might be surprised to learn that CBDv is one of the more elusive cannabinoids when it comes to availability. In a world where CBD is available in nearly every form imaginable, CBDv is still a rarity. If you're looking to purchase CBDv, you're going to have to look into a reputable source or, if capable, try to grow it yourself.

You can purchase CBDv through a number of vendors online, but you might have to dig a little bit due to the limited supply.

What is CBDv Used For?

Alright, let's get to the good stuff - What even is CBDv good for?

Unfortunately, this cannabinoid has little information with research backing up some of the claims surrounding it. Some online sources tout CBDv as a more effective version of CBD, stating it has a wide range of effectiveness when it comes to treating ailments such as seizures, inflammation, and other medical conditions. However, much like the rest of cannabinoids on the market today, FDA approved research is scarce.

That said, there have been plenty of instances of people sharing their experiences with CBDv - both supporting and contradicting claims of its effectiveness when it comes to being used for relief. Similar to other hemp products, the effectiveness and results will vary greatly from person to person. A great example of this is a recent study that was conducted in 2019, focused on how an acute dose of CBDv can affect the systems in the brain that are responsible for both excitation and inhibition. With the goal of the test being a wide variety of things, one key focus was identifying whether the metabolization of CBDv across autistic individuals could incite a biological response that is consistent across the participants, mainly used to gauge variability of treatment response for future medical research.

Due to the goal, the test was conducted across a group of men, specifically with and without Autism Spectrum Disorder (ASD). Although admitted across a sparsely sized group, it was found that:

CBDV can ‘shift’ subcortical levels of the brain’s primary excitatory metabolite glutamate (measured as Glx) both in the neurotypical and autistic brain.

To summarize the results - it appears that in terms of being geared specifically towards finding a biological marker in individuals with ASD specifically, there's no clear cut answer and more research is required. However, the information gathered is substantial.

The utility of this observed shift in BG Glx for predicting an individual’s long term (clinical) treatment response is unclear; and was not part of our study. Previous research suggests that the BG are connected with other cortical and subcortical regions in the form of subcortical-cortical-thalamic loops, which are regulated and maintained by excitatory and inhibitory neurotransmission38,39. These loops support a range of cognitive functions and behaviours, such as reward, learning, memory, and motor processing39,40,41,42,43,44,45,46,47,48,49,50, which can be impaired in ASD51,52.

Future studies should therefore examine the impact of CBDV on these cognitive processes and behaviours to determine if CBDV may offer clinical benefits in specific autistic subgroups.

So, what does this mean?

Well, in short - It means CBDv does something.

Unfortunately, as the study mentioned, there's a plethora of research that still needs to be conducted before coming up with a conclusive summary on its effects when consumed.

It seems there's a lot more to this cannabinoid than what's been revealed so far.

Research is still extremely limited, but the spotlight seems to be shining on it as of lately. Nevertheless, CBDv has a long way to go before it can be considered a viable option for people who are looking to get some relief from their ailments.

However, given the growing popularity of CBDv and the fact that it can be derived from industrial hemp, it's pretty likely that we will see more research being conducted in the near future.